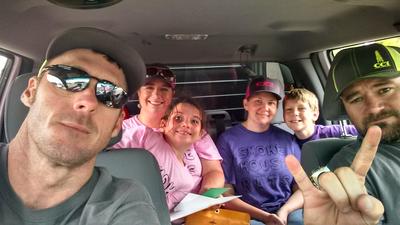 Our story begins in the Fall of 2010...Dustin and Joe went on a weekend

one night and according to Joe, "that is best steak I've ever had".

About a year later, Joe heard on one of the local DFW radio stations

about a "Back Yard Chef" steak cook-off in Decatur, Texas.  He

called Dustin and after discussing the details with their wives (ok,

maybe that was a stretch), they decided to give this steak

table, and a 5-year old propane grill.  They were greeted by a host of spotless, and shiny, and big, and just beautiful rigs.  These people were legit.  These people were no "back yard chef".  These people did the steak cook-off thing...A LOT!  We were all extremely intimidated by the company we were in.  These people had trophies, multiple trophies, BIG trophies.  After debating on whether or not to leave, we decided to stay and at least have a good time.  Boy, are we glad a did.  We instantly met some amazing individuals and made some life-long friends.

Long story, short...we were probably the biggest underdogs that day.  We had NO CLUE what we were doing and it showed, but at the end of the day...all it takes is a truck, table and 5-year old propane grill to come out on top.  This was our first competition and we won 1st Place!  The rest is history!